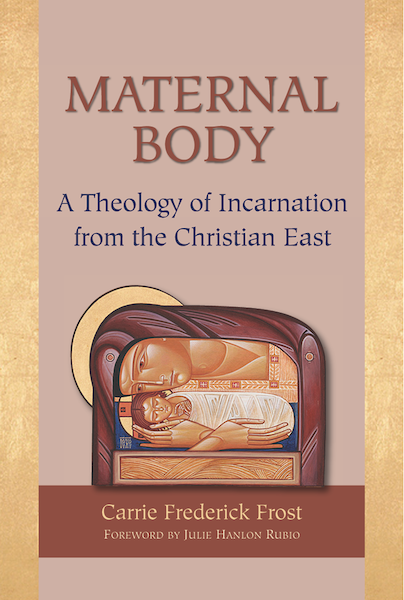 Maternal Body: A Theology of Incarnation from the Christian East (Mahweh, NJ: Paulist Press, 2019).
Maternal Body places Orthodox sources—icons, hymns, and prayers—on motherhood into conversation with each other. In so doing, this work brings an anchored vision of motherhood to the twenty-first century—especially the embodied experience of motherhood. Available from  from Paulist or any major bookseller.

Learn more about Maternal Body: A Theology of Incarnation from the Christian East. 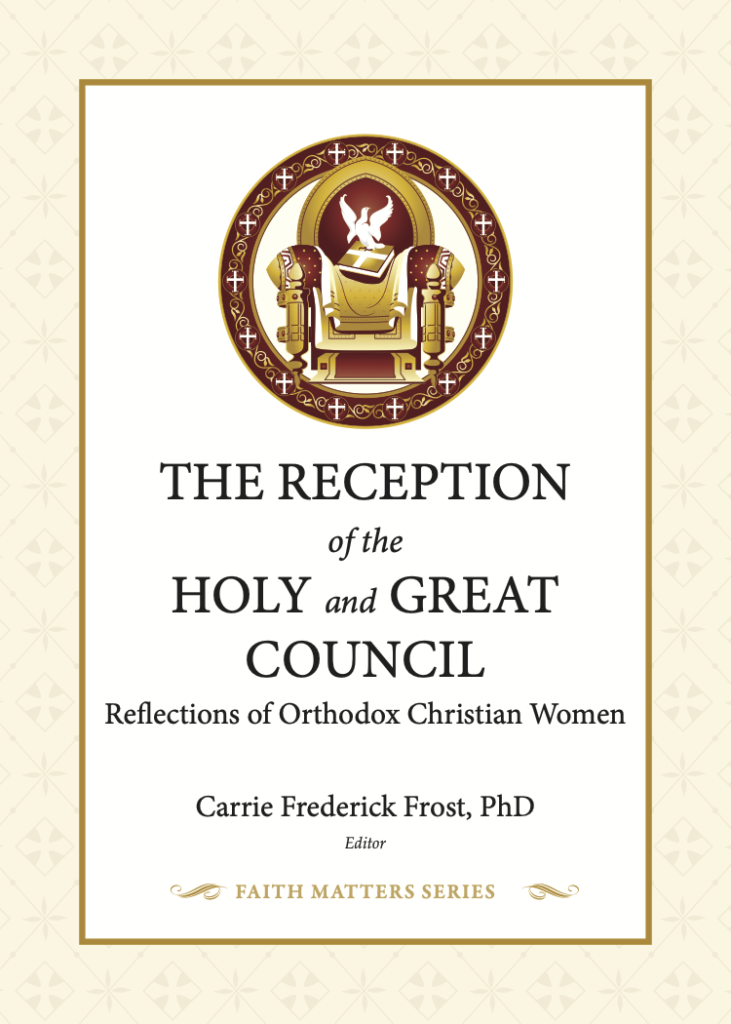 The Reception of the Holy and Great Council: Reflections of Orthodox Christian Women, ed. Carrie Frederick Frost (New York: Greek Orthodox Archdiocese Department of Inter-Orthodox, Ecumenical, and Interfaith Affairs, 2018).
This volume includes thirty essays by an international group of Orthodox Christian women who offer a diversity of responses to the Holy and Great Council of 2016 and meaningful reflections on the conciliar life of the Church at large. It includes an essay of mine, “A Legacy of Inclusion: Women and Future Councils,” and is available for purchase on the Greek Orthodox Archdiocese Marketplace.

“The Status of the Reinstitution of Deaconesses in the Orthodox Church Today: Consecrated in Africa, Considered Elsewhere,” Ecumenical Trends, forthcoming 2022.

“Newness under the Son,” Public Orthodoxy, December 23, 2021. A contemplation of the true and meaningful novelty of Christ’s Incarnation and human life.

“An Orthodox Christian Theological Ethic of Childbearing: An Analysis of Continuity and Change,” Orthodox Bioethics (tentative title), Project Science and Orthodoxy around the World, forthcoming 2023. This paper illuminates the allegiance the Orthodox Church maintains to certain theological and ethical concerns when it comes to childbearing, and—to some degree—its changing teachings on issues of childbearing in response to advancements in technology.

“Matters of Birth and Death in the Russian Orthodox Church and Ecumenical Patriarchate’s Social Documents,” Studies in Christian Ethics, forthcoming in 2021. A side-by-side comparison and analysis of the documents’ treatments of matters of birth and death, including childbirth, abortion, euthanasia, and suicide. This detailed comparison yields great consonance between the two churches on many matters, with differences of omission and emphasis which may be indicative of their contrasting demographic and geographic situations.

“Co-Laborer Organizations,” Pilgrims Toward the Kingdom: The Beginnings of the International Orthodox Theological Association, IOTA Publications, 2020. This flagship volume of the International Orthodox Theological Association, of which I am board secretary, explains and celebrates the origins of the organization and this chapter recounts the session at our inaugural mega-conference in which organizations who are working in the vineyard together with IOTA shared their missions in a roundtable format.

“The Orthodox Church and Its Social Ethos: The Aims and Accomplishments of For the Life of the World,” Ecumenical Trends, vol. 49, no. 5, Sept/Oct 2020, pp. 5. An overview of the origins and significance of the social ethos document of the Ecumenical Patriarch, which I helped to compose.

“A Flourishing Diaconate Will Ground—Not Predetermine—Conversation about the Women in the Priesthood,” Women and Ordination in the Orthodox Church – Explorations in Theology and Practice, edited by Gabrielle Thomas and Elena Narinskaya (Eugene, Oregon: Cascade, 2020). I discuss the ways that ordained deaconesses again will allow the church to experience women in ordained ministry and thus inform the conversation, but not pre-determined the outcome, around women in the priesthood.

“Maternal Body: Incarnational Theology Through a Maternal Lens,” Public Orthodoxy, August 14, 2019.
Here I explain the origin story and central themes of my new book, Maternal Body: A Theology of Incarnation from the Christian East.

“Pro-Life Liturgy,” First Things, April 2019, p. 27-30.
On how the celebration of feasts of conception rightly shapes thinking about the beginnings of the human person.

“Towards a Reasoned and Respectful Conversation about Deaconesses,” Public Orthodoxy, April 17, 2018.
With co-authors from the St. Phoebe Center for the Deaconess Board: AnnMarie Mecera, President; Caren Stayer, Ph.D.; Gust Mecera; Teva Regule, Ph.D.; Helen Theodoropoulos, Ph.D.
Thoughts on fostering a empirically grounded, civil, and helpful discussion on the female diaconate.

“Women and the Conciliar Life of the Church,” The Reception of the Holy and Great Council: Reflections of Orthodox Christian Women, ed. Carrie Frederick Frost, Faith Matters Series, Vol. 4., Department of Inter-Orthodox Ecumenical and Interfaith Relations, 2018. A view of the history, present, and future of women and councils in the Orthodox Church.

“Women’s Gifts and the Diaconate,” Public Orthodoxy, March 6, 2018.
The Orthodox understanding of male and female involves parity as well as difference, and the Church would benefit from the gifts of women in new ways if the ordained female diaconate were revived.

“A Relationship to be Emulated: The Maternal Kinship Between the Mother of God and Her Cousin Elizabeth,” Praxis Magazine, Greek Orthodox Archdiocese of America Department of Religious Education, Vol. 17, Issue 2, 2018.
What we might learn from the special kinship between cousins Mary and Elizabeth when they were both expectant mothers.

“Not a Novelty: The Eastern Orthodox Case for Deaconesses,” Commonweal, June 2, 2017.
On the state of the current consideration of reviving the female diaconate in the Orthodox Church.

“Childbirth is a Blessing, Not an Occasion for Impurity,” Public Orthodoxy, April 26, 2017.
A look at the theologically unsound connection between impurity and childbirth in the Church’s post-partum prayers, and the changes that are thankfully coming to these prayers.

“Women Deacons in Africa; Not in America,” Public Orthodoxy, March 2, 2017.
Analysis on why women are being consecrated deaconesses in Africa but not in the US.

“Women Willing to Offer Themselves: The Historic Consecration of Deaconesses in Africa,” The Wheel, March 2, 2017.
Reflections on the incredible courage of the first deaconesses of the Orthodox Church in the twenty-first century.

“‘Let Them Come Unto Us’: Rearing Children Within an Eastern Orthodox Marriage Tradition,” Family Wellness Ministry of the Greek Orthodox Metropolis of San Francisco, July 4, 2016.
Thoughts on the ascetical endeavor that is parenthood.

“The Power of a Mother’s Prayer,” Greek Orthodox Archdiocese Blog, July 1, 2016.
A short meditation on a mother’s prerogative to pray for her children, and the special power of those prayers.

“Pentecost on Crete?” Commonweal, May 24, 2016.
An anticipatory look at the Holy and Great Orthodox Council of June 2016.

“A Bruised Reed He Will Not Break,” Family Wellness Ministry of the Greek Orthodox Metropolis of San Francisco, June 20, 2016.
Reflections on my own mother’s suffering and the way she understood it in light of her Orthodoxy.

“In Hope of Restoration of Communion Between the Orthodox and Oriental Orthodox Churches,” Public Orthodoxy, Orthodox Theological Society in America Special Project on the Holy and Great Orthodox Council, May 2016, with co-authors Vigen Guroian, Valerie Zahirsky, and Jennifer Haddad Mosher.
A simple plea for the Holy and Great Council of 2016 to remember the relations between its churches and those of the Oriental Orthodox.

“Churching: The Orthodox Rite of Churching the Mother and Child After Childbirth,” Saint Phoebe Center for the Deaconess, April 2016.
A four-part series that explores the past, present, and future of the Orthodox Christian Churching prayers that welcome a woman back to church after giving birth.

“The Sacrament of Love,” Commonweal, February 10, 2016.
An Orthodox theology of marriage and remarriage.

“The Need for Liturgical Rites for Miscarriage and Infant Death,” Orthodox Association of Medicine, Psychology, and Religion, Winter 2016.
An acknowledgement of the great need for compassionate and appropriate liturgical prayers having to do with miscarriage and infant death as part of the healing process.

“I must watch over you”: The virtue of familial responsibility, The Clarion Review, December 2013.
Finding a theology of family in Sigrid Undset’s Kristin Lavransdatter.

“Purify Her Uncleanness,” First Things Online, December 2012.
A brief look at the history and theology of the childbearing rites of the Orthodox Church, with a case made for altering them.

“Under Her Heart: Motherhood in Kristin Lavransdatter,” First Things Online, January 2011.
The full, nuanced, and rare treatment of motherhood in the epic trilogy about a pious Christian woman in fourteenth century Norway.

“Searching for Mothers in the Fathers,” Sophia, Sophia Studies in Orthodox Theology, vol. 1, 2009.
The challenges and rewards of seeking theological thought on motherhood in patristic sources, with particular attention paid to John Chrysostom’s homilies on Hannah.

“Brood Comments,” Salvo, Winter 2009.
The unintentionally public experience of parenting (what today is) a large family.

“Easter in Technicolor,” Commonweal, April 2007.
The ancient tradition of Ukrainian egg dyeing and its theological import.

“Theology in Motion,” Commonweal, January 18, 2022. A review of the excellent Fertile Ground: A Pilgrimage Through Pregnancy by Laura S. Jansson.

Mothers of Faith: Motherhood in the Christian Tradition by Wilfred M. Sumani, American Academy of Religion’s “Reading Religion.” This compendium of Christian mothers with accompanying meditations is a welcome addition to the slowly growing body of work on motherhood in Christianity and will serve anyone who wishes to further contemplate how this universal human experience is lived, expressed, and understood in Christianity.